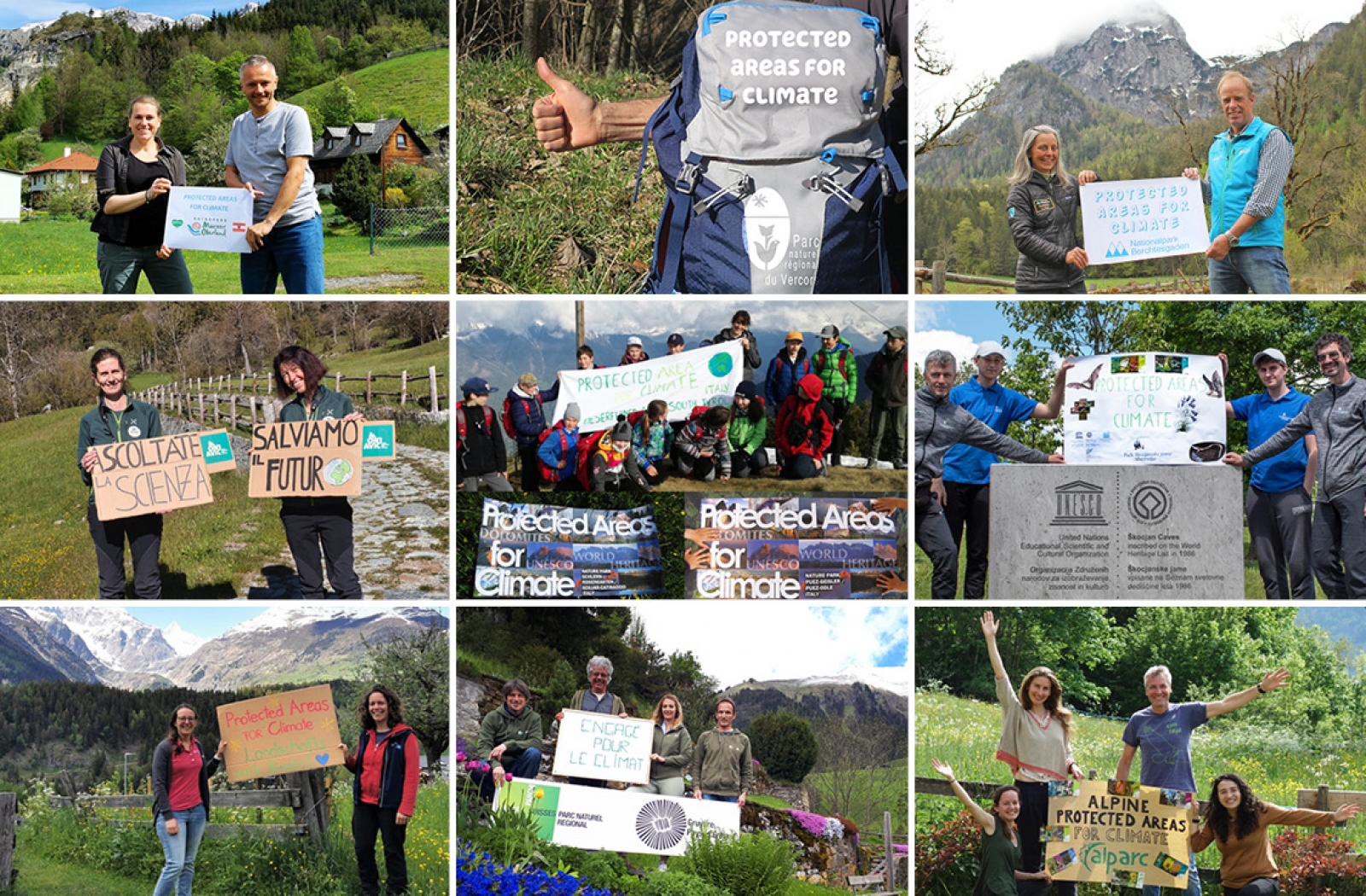 Alpine Protected Areas have long since been deeply involved in climate matters. With their restricted human influence, national parks are ideal places for observation and learning. In addition, with an ever- increasing number of visitors, nature parks and regional parks also have a unique opportunity to raise awareness on climate change and its consequences for the general public. Across the Alps, Protected Areas are therefore leading various actions regarding climate. Research, monitoring, awareness-raising and educational activities… acting for climate can take many different forms!

To celebrate this first edition of the Climate Hour, we have gathered below a small sample of the actions for climate being led by Protected Areas across the Alps, together with a photo collection (see above) featuring the engagement of “Alpine protected areas for climate” !

For families and schools, the Climate change adventure trail is a unique excursion destination that enables visitors to find out about climate protection and biodiversity. The aim of this new adventure trail is to focus on the topics of biodiversity and nature conservation at 14 adventure stations, each with a special reference to living space. How will the habitats and their endangered and protected species in the Mürzer Oberland Nature Park develop in view of the changes caused by climate change? What ,if any, are the threats from neobiota?

In recent years there has been a significant increase in the effects of the phenomenon of climate change, effects which are also increasingly affecting the inhabitants of the nature park directly. There has been an accumulation of damaging events in the immediate vicinity. These include, among other things, floods with massive mudslides, a lack of snow, large-scale breakage due to icing, drought, avalanches and damage from bark beetle infestation. Based on the available data, a massive increase in these effects can be expected in the near future. With the topic of “climate change”, the Mürzer Oberland Nature Park deliberately chose a very topical subject which had not yet been presented in an adventure trail in Austria. This gives the adventure trail and the region a unique position and a pioneering role in Austria.

The climate change adventure trail has received a positive reception by the delighted population and guests alike. The feedback from the individual adventure stations has been very positive.

In 2005, the Parc du Vercors launched a program called “Climate Observatory”. This program started, in the territory of the Hauts-Plateaux du Vercors National Nature Reserve, with the installation of 3 weather stations and three recorders (temperature, humidity and rainfall) on the Integral Biological Reserve (RBI) of Vercors. A framework agreement was signed with UJF (University of Grenoble) to set up research partnerships around climate change and its consequences on the environment (biodiversity, hydrology, etc.). This observatory aims to assess the impact of global change on the ecosystem, water resources and biodiversity. From 2017 to 2018, a partnership with the University of Grenoble allowed this tool to be redesigned: the 2.0 observatory, the device integrates new indicators, particularly hydrological, and extends its field of observation to the entire massif. The research undertaken at the Vercors scale should make it possible to specify the spatio-temporal evolution of regional climatic limits and to improve the understanding of certain bioclimatic interactions (water / soil / snow / vegetation). It also participates in the development of future environmental policies for protected areas.

On June 5th : For the Climate Hour, the parks organizes an open-air artistic walk « Chemins à ciel ouvert ». Through the intervention of a choreographer (Frank Micheletti) and a geographer anthropologist (Chiara Pia), the Regional Natural Park will organize an open-air artistic walk at the intersection of bodies, voices and all the elements that make up the unique landscape of the Vercors. The walk is based on the principle that culture participates in the construction of rural (and mountain) territories and that it plays a role in revealing the effects at work in terms of climate and global changes more generally. As a duo, the artist and the researcher will combine their knowledge and the collection of stories and observations that they will have gathered to build a new cultural itinerary (and without a car!) along the path "Au fil de la Bourne" . The opportunity for participants to take another look at their territory and their relationship to nature, landscapes and geography.

The area of research and monitoring in the Berchtesgaden National Park was significantly strengthened with the start of cooperation with the Technical University of Munich (TUM) last year. In a first major project, the effects of climate change on the dynamics in ecosystems and their biodiversity are to be investigated. The project is led by the National Park research directors Dr. Sebastian Seibold and Dr. Rupert Seidl, the coordinator. The newly assembled team of Berchtesgaden National Park researchers is currently dealing with numerous research questions, all of which address the various facets and effects of climate change. […] ”The Berchtesgaden National Park is an ideal research area because of its terrain: the temperature drops by around 6 ° C every 1,000 meters. "This is a unique opportunity for climate change research, which, to a certain extent, allows a look into the crystal ball," explains Seibold. […] From the knowledge gained, the scientists can deduce how nature will change within the national park. In addition, recommendations can be made on how forests and meadows should also be managed outside the national park in order to maintain their biodiversity and natural productivity in the future.

The Mont Avic Natural Park carries out monitoring (animal and plant phenology within the framework of the Interreg “PhenoAlp” project), research (effects of climate change on forests) and public awareness actions. PhenoAlp (2007-2013) was an Interreg project aiming to get a better understanding of phenological changes in the Alps. The major goals of the project were:
● The implementation of an observation network in the territories involved
● The definition of a common observation strategy and common protocols
● The involvement of local community members (e.g. through schools) in the observation activities as a way to increase awareness on the issue of the effects of climate change.

On June 5th: For the first edition of the Climate Hour, the Park organize a local event for young people from 8 to 14 years old “The Alpine Climate in Your Hands”: A day to raise awareness on the issue of climate change. OUting to a peat bog and laboratories.

On June 5th 2021, for the first edition of the Climate Hour, Nature Park Visitor Centers will give away ecological footprint questionnaires to the visitors. This document provided by the OEW is a way to make people think about the consequences of their actions and to raise awareness about Climate Change.

Climate change consequences are clearly visible within the cave of Park Škocjanske Jame. Stalagmites and stalactites indeed grow depending on climate and it is therefore possible to “see” the ice age growth and the evidence of the current climate warming, by mere observation. Meanwhile, in the sinkholes surrounding the cave, one can observe some remains of flora and fauna from ice age and from Mediterranean climate. Nowadays, the area is more considered as offering a submediterranean climate. All this information is passed on visitors, to increase awareness on Climate Change.

The objectives of the “Expedition 2 Grad” project focused on visualizing and experiencing a 2°C climate warming in the Alps by means of a VR-Experience in two partner museums. By means of Virtual Reality (VR) participants undertake the “Expedition 2 Grad”: In a virtual world around the Great Aletsch glacier the target audience interactively experiences the effects of increasing temperatures on the Alpine environment. By this journey through space and time, emotions are triggered and the users experience the region of Aletsch through the eyes of their grandparents and of future generations. Virtual Reality allows the public to experience a global warming of 2°C in a high mountain environment. The politically determined and abstract 2 degree target can be clearly communicated in an impressive way. The result is meant to motivate reflection – on individual decisions but also efforts of society, which in the end lead back to personal behaviour. Questions on what climate change exactly means and how we can cope with the challenges of climate change as society were discussed and answered in a common discussion. The “Expedition 2 Grad” was primarily intended for school classes of Secondary and College level (12-17 years). The main module was the interactive VR-experience but it also included an adapted supporting program with a moderated class discussion. A total of 40 school classes in workshops have been supervised. In 2020, the project was developed further in the new visitor centre of Pontresina.

On June 5th : For the Climate hourn a local event open to the general public is organized. For the first edition of the Climate Hour, visitors of the Swiss National Park will be invited to enjoy:
- various information stands (eg: “Plants, Animals and Climate in the SNP”),
- a seed and seedling fair
- an excursion with the theme : “Terraced landscape and grain cultivation in the face of climate change”. Excursion conducted by Padruot Fried and Peer Schilperoord
- two lectures: “Fruit trees and gardens - culture and diversity of the inner Alps” by Thomas Kohl and Angelika Abderhalden, Pro Terra Engiadina Foundation and “Tomorrow's nutrition needs yesterday's diversity” by Béla Bartha, ProSpecieRara

The park has integrated the climate emergency as a new transversal objective of the 2022-2031 park charter: reduction of greenhouse gas emissions and adaptation to climate change.

A member of the association Cité de l'énergie since December 2009, the Gruyère Pays-d'En-haut Regional Nature Park and the member municipalities are committed to a global process leading to a sustainable policy in terms of energy, transport and environment. Many actions have been implemented: territorial energy analysis, reduction of energy consumption, increase in the share of indigenous renewable energies in final consumption, reduction of environmental impacts linked to energy consumption, information, communication, cooperation and awareness of the population… In 2021, thanks to the accomplished work, the Park and the 15 participating municipalities obtained the “Cité de l'énergie” label.

A local bus called „Bus alpin“ is now providing public transport to destinations that were previously only accessible to private transport. The buses run in fixed route operations as well as on an on-call bus basis. This avoids the use of private cars and therefore helps to reduce CO2-emissions.

Within the park, Ernen is part of the “energieregionGOMS” and offers the residents and guests an environmentally friendly, CO2-neutral heating system with a wood chip heating system. It is supplied with wood chips from local forests and also reduces odor emissions during the heating season. The association "energieregionGOMS" has the vision to position the Goms region as the first energy region in the Swiss Alps. Sustainable and local energy production is promoted so that production, conversion and consumption can take place in the Goms region while minimizing transport.

With Its long-term ALPARCLIM program launched in 2020, ALPARC wants to publicize campaigns by the parks that serve climate protection and have concrete effects:

● Innovative approaches by the parks and the regions: For some years now, climate protection campaigns have been carried out in the parks and the population has been involved, especially in the inhabited protected areas. In 2019, ALPARC carried out an initial survey on the actions and measures that were implemented to protect the climate or as adaptation strategies in the car parks and intends to encourage such actions across the Alps.

● Protection of biodiversity and habitats threatened by climate change: The central topic for ALPARC is the preservation of biodiversity. Climate protection and biodiversity protection have a close connection which, however, has not yet been sufficiently recognized by society or by political decision-makers and is expressed in concrete political action and measures. ALPARC therefore wants to use all of its available means of communication in order to attract greater attention to the alpine area.